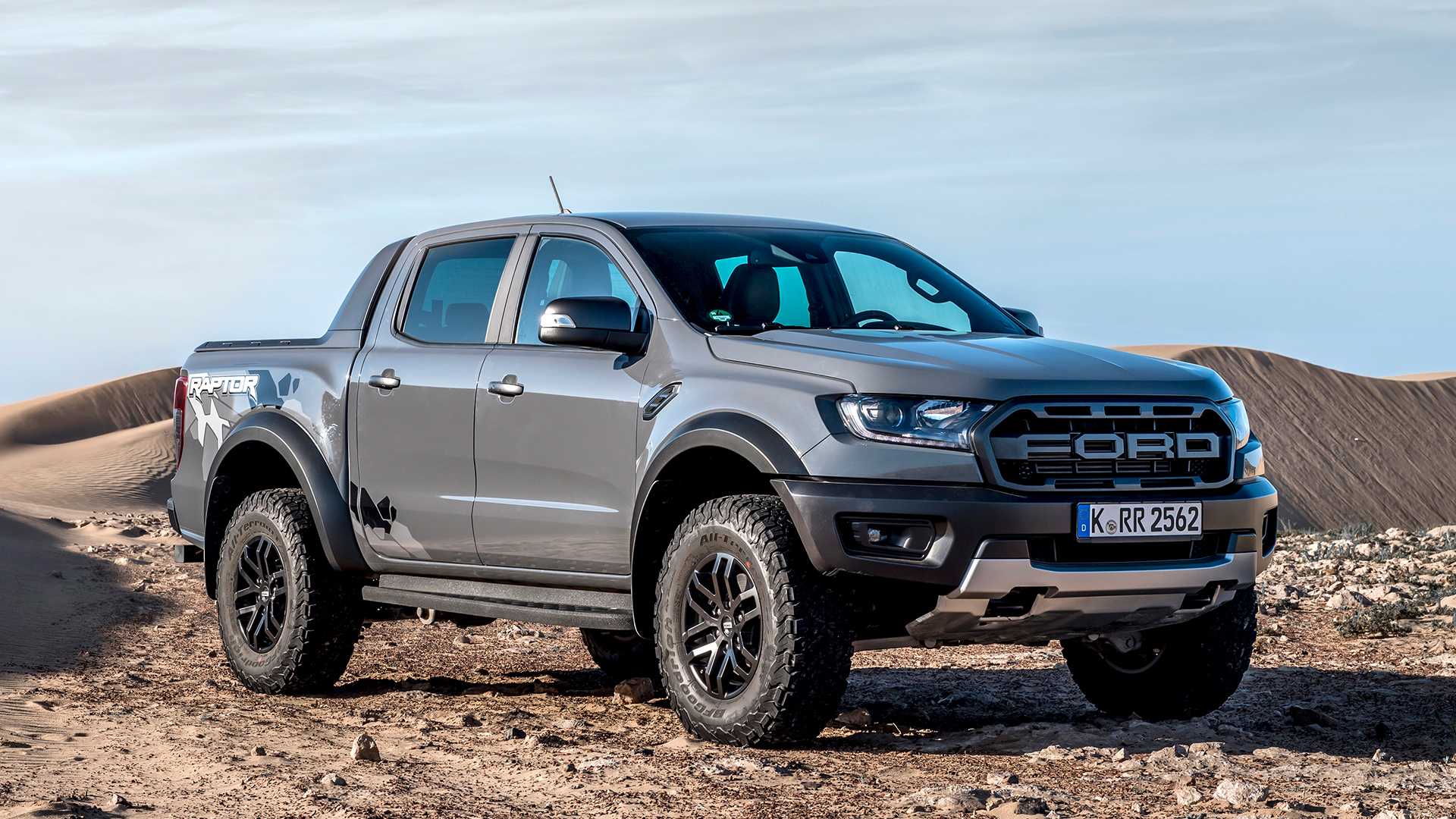 Ford unveiled the next-gen Ranger Raptor (RR) in February 2022 and I has been the talk of the Ford community! This current 2023 model is a huge improvement than the outgoing model, we (USA and Canada) will finally get the Ranger Raptor, since it's been gone for over a decade. Ford finally realized that there is a high demand for these mid size trucks in these 2 countries. So, they announced that they will be here on our soil soon.

Now that we know its official and the RR is making its way here from overseas, let's break down the truck! Ford finally moved it to a new platform after basing it on the T6 architecture for 11 years. The new 2023 Ford Ranger Raptor also comes with an upgraded suspension setup, updated exterior aesthetics and interior features, and even features a V-6 engine under the hood. There are a lot of other changes as well, and here’s everything you need to know about the next-gen 2023 Ford Ranger Raptor: 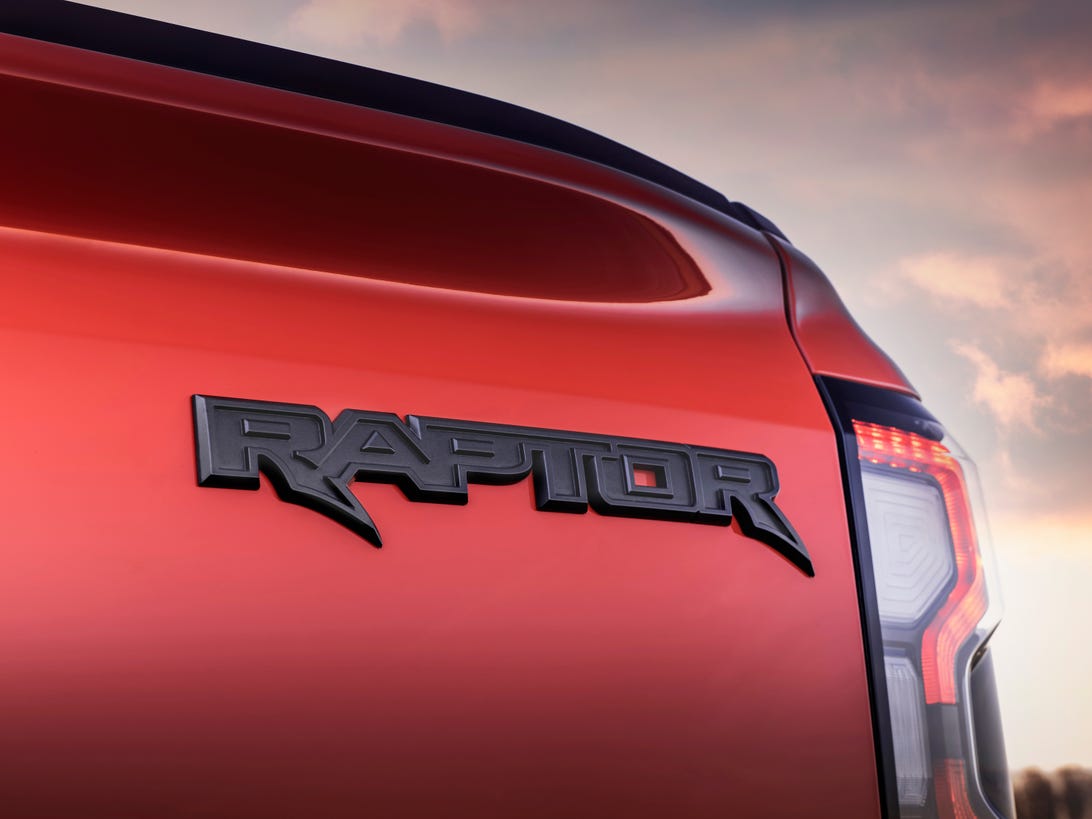 Since it is based on the 2022 Ranger, the changes are Raptor-specific only. It looks more butch and bulky, but not a completely different animal; which obviously wasn’t Ford’s intention either. The front fascia features the signature Raptor grille with the F-O-R-D lettering. There are the C-clamp headlights, a design that has kind of evolved from the Maverick. You get matrix LED headlights and DRLs here.

Ford has opted for some aero elements here. You also get functional air vents to dissipate the hot air. The off-road version of the Ranger is equipped with 17-inch alloy wheels that are shod in Raptor-exclusive performance all‑terrain tires. Apart from this, the Ranger Raptor also features cast-aluminum side steps.

Things at the rear aren’t very different when compared to the standard Ranger. But, the stuff that’s new here includes a Precision Grey rear bumper that features an integrated step pad and a towbar. The towbar is tucked up high and won’t compromise with the departure angle. The LED taillights complement the headlights. You also get two tow hooks at the front and the rear.

Ford hasn’t revealed the dimensions and off-road figures yet, but here are the numbers for the 2022 Ranger Raptor, for your reference. We don’t expect the new Ranger Raptor’s numbers to be a lot different from these figures. The 2022 Ford Ranger Raptor measures 212.5 inches in length, 79.8 inches in width, and 73.7 inches in height. The wheelbase is 126.8 inches long and it sits 11.1 inches above the ground. The front and rear tracks are 67.3 inches wide, whereas the front and rear overhangs measure 35.7- and 50 inches, respectively.


As for the off-road angles and figures, the 2022 Ranger Raptor boats of an approach angle of 32.5 degrees, and a departure- and breakover angle of 24 degrees each. The water wading depth is rated at 33.5 inches. 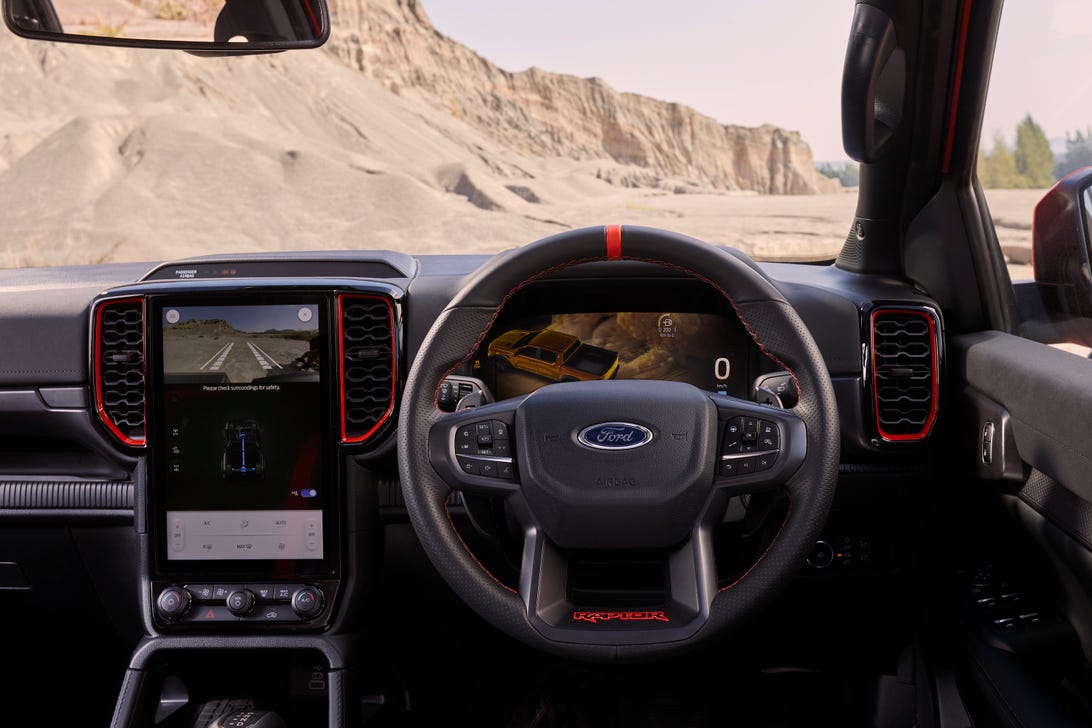 The cabin looks different from the model it replaces. The automaker has packed fighter jet-inspired sports seats make sure you stay in place when going hard around the corners or off the roads. The exclusive Ford Performance Code Orange shade has been used all around the cabin. You can see accents in this color on the instrument panel, trim, and seats. You also get ambient lighting. 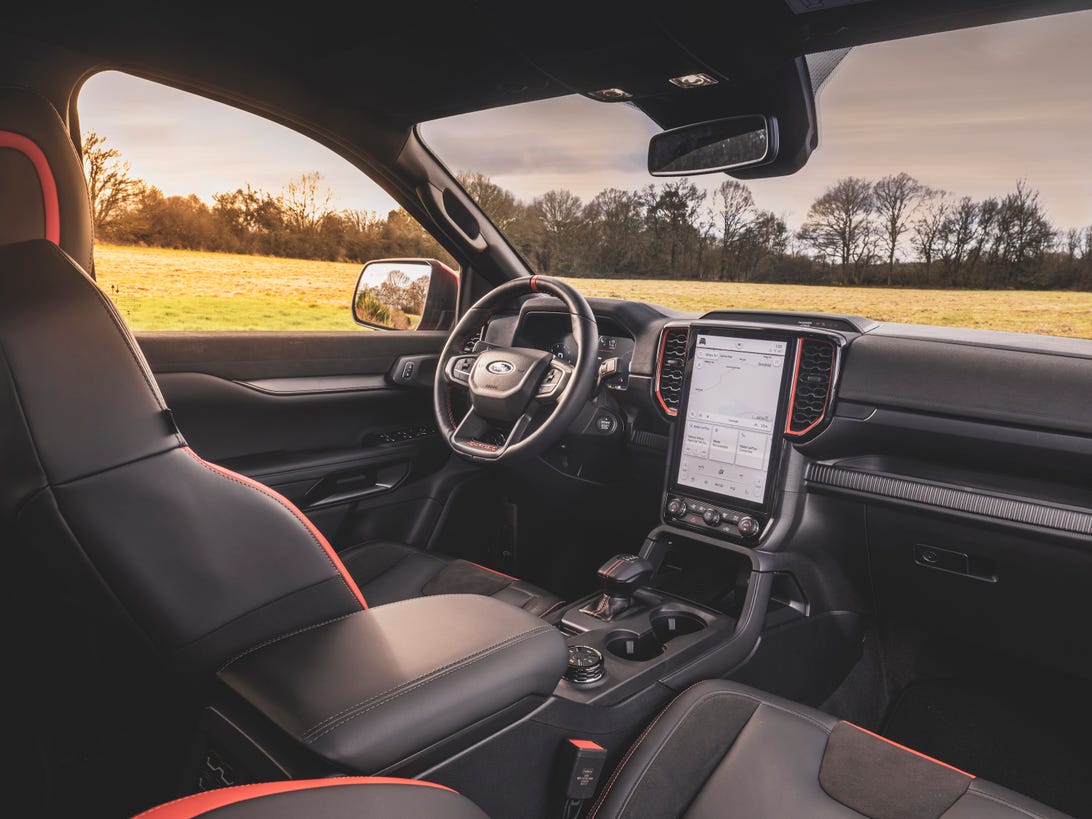 Step into the cockpit and you’ll be welcomed by a leather sports heated steering wheel with cast-magnesium paddle shifters behind it. Behind this chunky steering wheel is a 12.4-inch digital instrument cluster. There’s a 12-inch touchscreen on the center console and it is powered by Ford’s SYNC 4A infotainment system. It supports wireless Apple CarPlay and Android Auto. For you audiophiles, there’s a 10-speaker B&O sound system. 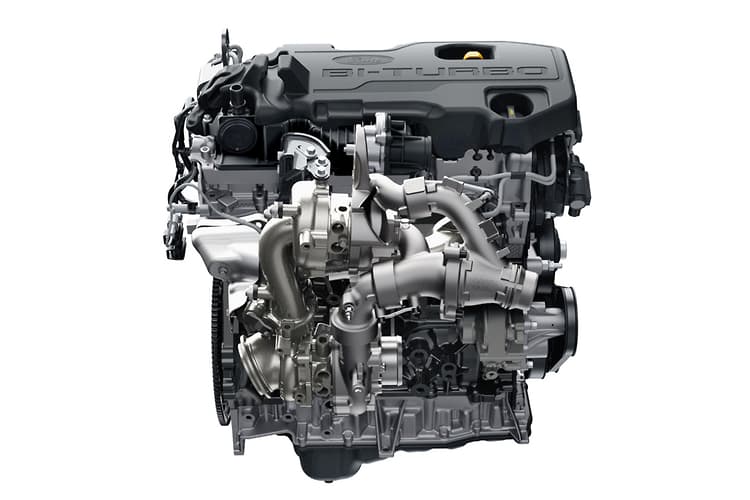 ​
The new Ranger Raptor will finally be getting a V-6 engine under the hood. This turbocharged mill displaces three liters and is the same mill that’s found under the hood of the Explorer ST and the recently unveiled Bronco Raptor. It will churn out 284 horsepower and 362 pound-feet of torque. This is significantly lower than the 400 horses and 415 pound-feet of torque it makes in the Explorer ST. The Bronco Raptor’s figures aren’t out, but expect them to slot between these two; more than the Ranger Raptor but less than the Explorer ST.

The outgoing model comes with a 2.0-liter, four-cylinder twin-turbocharged EcoBlue diesel engine, and Ford has decided to retain this 2022 Ranger Raptor engine as well. We’re not sure if Ford offer that to the North American market, though. The oil-burner makes 211 horses and 369 pound-feet of torque. This means it makes 73 horses less than the V-6, but seven pound-feet of torque more. Both the engines will be mated to a ten-speed automatic gearbox.

Ford has introduced something known as an Anti-Lag System here.This system keeps the turbochargers spinning for up to three seconds after the driver takes his foot off the throttle. This will come in handy when you are carving the corners hard and take your right foot off the A-pedal for a second or two before flooring it again. Instead of waiting for the turbo to spool again, this system will keep the turbo active for three seconds. Might not be a useful feature on the regular Ranger, but on the Ranger Raptor, it will be used more often than not. This isn’t a new system, per se. Ford debuted this on the GT car first and then introduced it on the Focus ST as well. Also, it can only be activated in the Baja mode. 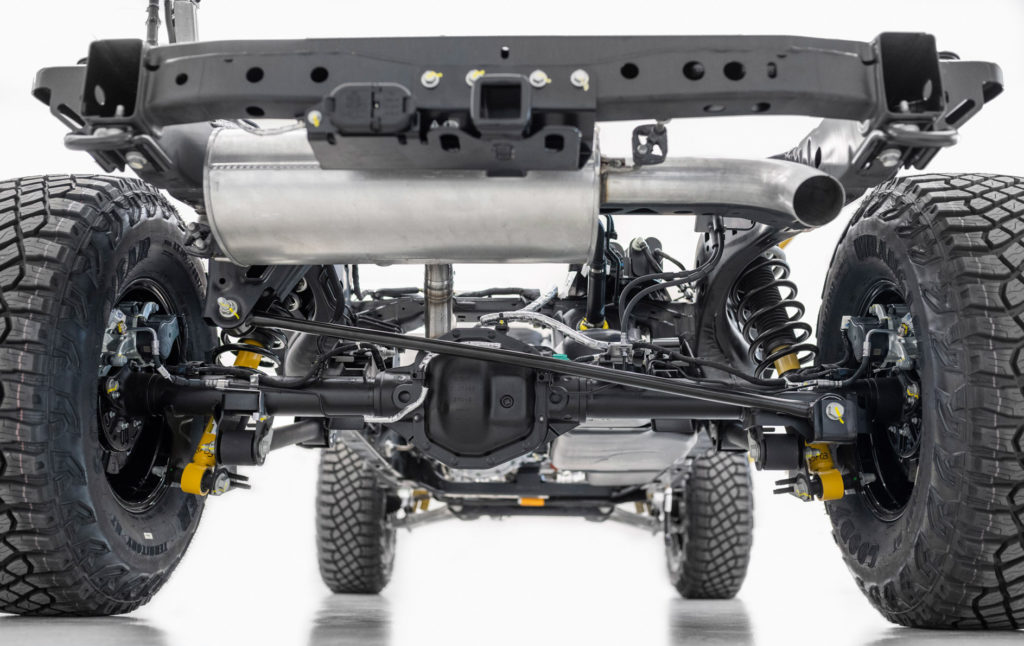 ​
Ford has ditched the T6 platform and moved the Ranger Raptor (and the Ranger, of course) onto a new platform. The automaker has reinforced the chassis in this case to handle all the abuse that the truck will go through. The chassis comes with Raptor-specific mounts and reinforcements in the C-pillar, load box, and spare wheel. Ford has also installed unique frames for the jounce bumper, shock tower, as well as the rear shock bracket.

Coming to the suspension setup, the company has equipped lightweight aluminum upper and lower control arms, a long‑travel front and rear suspension, and a refined Watt’s link rear end in the new Ranger Raptor. The setup also comes with new FOX Live Valve dampers and next-generation FOX 2.5-inch Live Valve internal bypass shock absorbers with position-sensitive damping capability. Ford says it adapts in real-time to improve body control. To ensure the truck doesn’t bottom out, the Ranger Raptor has also been equipped with FOX Bottom-Out Control. It provides maximum damping force in the last 25-percent of the shock travel.

The smallest Raptor truck comes with an advanced full-time four-wheel-drive system with a new electronically‑controlled, on-demand two-speed transfer case that’s combined with front and rear locking differentials. Ford has also opted for an electronically controlled active exhaust system to give out the right roars and grunts. It features four selectable modes – Quiet, Normal, Sport, and Baja.

The 2023 Ranger Raptor comes with seven drive modes, four of which are off-road and three on-road modes. They include:
To protect all these components from underbody hits, the Ranger Raptor has been equipped with ample protection. There’s a front bash plate that’s twice the size of the plate present on the Ranger. There’s also an engine under-shield and a transfer case shield that protects the radiator, steering system, front crossmember, engine sump, and the front differential.

Finally, Ford has also offered Trail Control here. It is basically a cruise control for off-roading and can be set below the speeds of 20 mph (32 kph). Ford offered it on the Bronco Raptor as well. 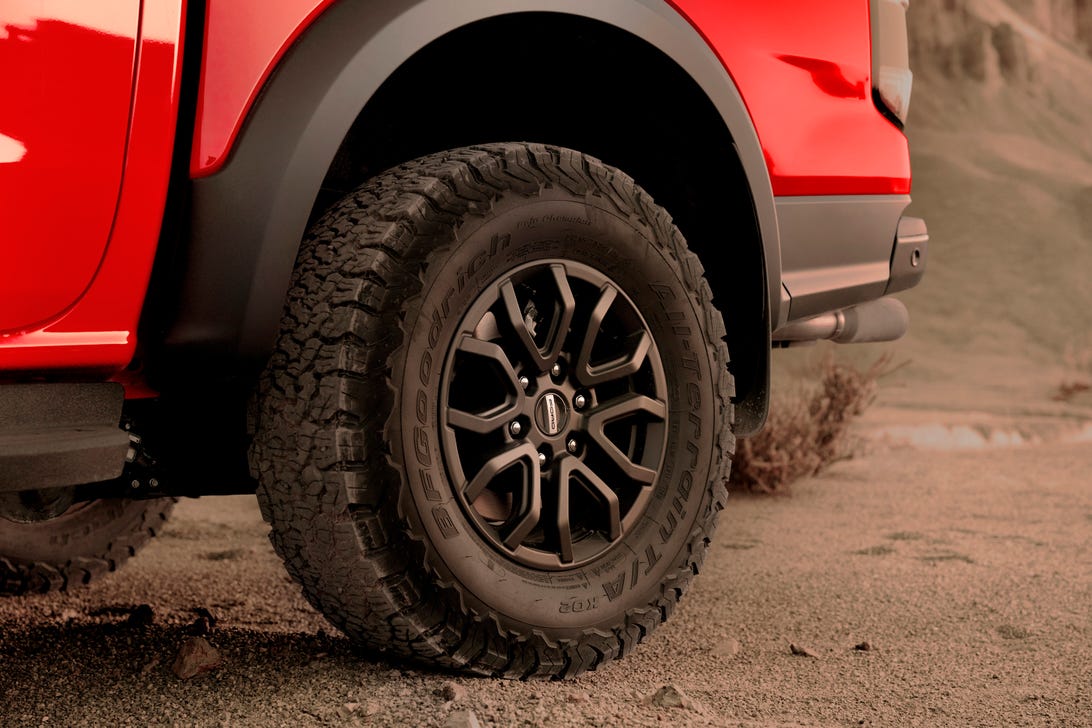 Ford hasn’t revealed the pricing of the 2023 Ranger Raptor, but we should hear more about it in the coming months. If we were to speculate, we would say it will start at around $40,000. For your reference, the top-spec standard Ranger Lariat starts at $39,465 with a SuperCrew body style and when equipped with the four-wheel-drive system.

When will it come to the US and Canada?

According to Ford’s CEO, Jim Farley announced on Twitter than the 2023 Ranger Raptor will coming over the States and Canada starting next year. 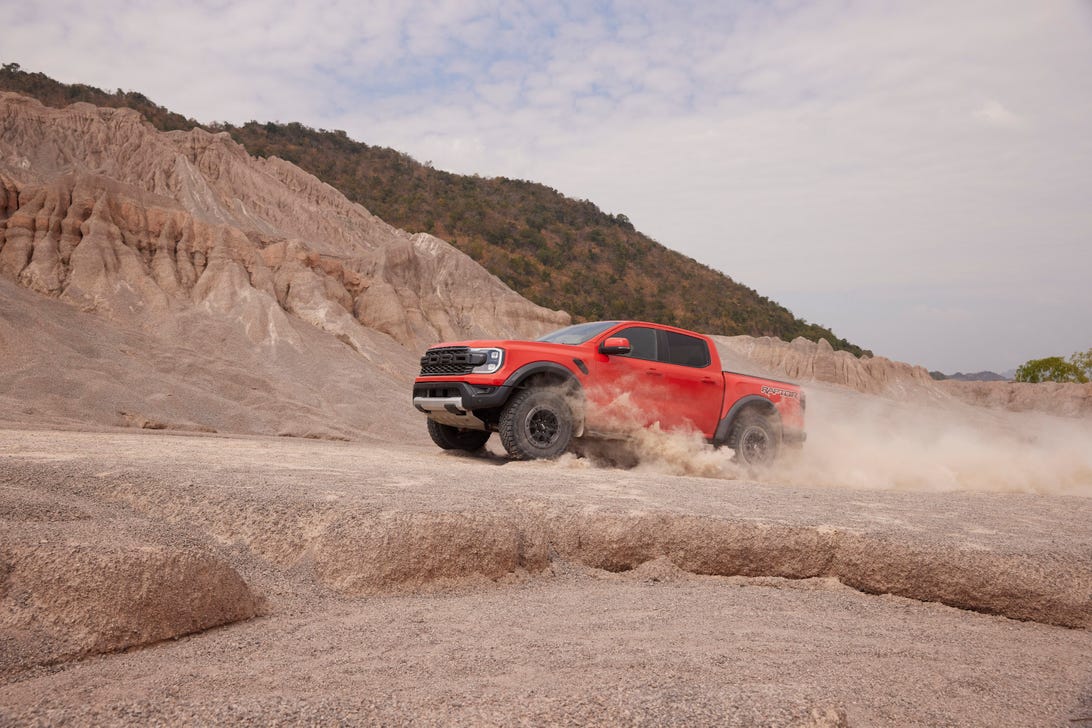 Ford has been killing it lately with a plethora of smart launches. While brands like Mercedes are focusing on launching an EV attack on the world, Ford is going about with a nice mix to make sure no segment or customer base is left untouched. It all started in 2020 when the company brought in a new generation of its bread and butter, the F-150. It then resurrected the Bronco, and brought in a crossover, more urban-centric version of the same called the Bronco Sport. This was followed up with the F-150 Raptor, and the announcement of the F-150 Raptor R,that’s due this year. To make sure the EV segment wasn’t left out, the automaker then shifted its focus to the F-150 Lightning.

Just when we thought Ford will take a break, it decided to bring in the Bronco Raptor, and now, the Ranger Raptor.. Let’s not forget the new generations of vehicles like the standard Ranger and the Everesteither. With the Ranger Raptor coming to the States next year, expect Ford to grow its market share in the truck segment even more. If Ford gets greedy (actually we are the greedy ones here), we could have a Ranger Raptor V-8 also. It’s way too soon to talk about it, but it isn’t exactly out of scope.
Last edited: Mar 8, 2022
Click to expand...